Magell refurbished the building interior during 2016 and renamed the building Jefferson House. The ground floor comprises five retail units and the upper floors are let to DWF solicitors and HNH Group.

The building occupies the site of the Evangelical Union Meeting House, built 1858 by John Boyd. This was later replaced by a 7-storey building called Kingscourt, designed by W.J.W. Roome for Mr Alex King, coal merchant. Kingscourt was built 1899 – 1901 by McLaughlin & Harvey. The building was severely damaged by fire bombing in 1974 and was demolished soon after. The site was used as car parking until construction commenced on the current building (Sun Alliance House) in 1985. 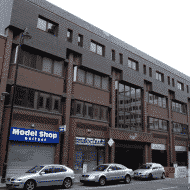