William Adolphus Ross (1817-1900) acquired the site in 1879 following employment as managing director at Cantrell & Cochrane. Ross established his own soft drinks business; William A. Ross & Co. Ltd, and by November 1879 the firm was reportedly producing nearly 30,000 bottles a day and exporting to the United States, West Indies and Africa. Ross’s Royal Ginger Ale was the firm’s principal product and for some time the company traded as ‘The Royal Belfast Ginger Ale, Mineral & Aerated Water, and Cordial Manufactory’. Other products included soda water, lemonade, potash water, seltzer, sarsaparilla, Lithia, Vichy water, aromatic bitters and cola. The firm used wells located on the site which sunk to depths of up to 420ft.

The firm appointed Robert Graeme Watt to design a new warehouse at 1-7 Montgomery Street. The three-storey building was built in 1883 and on completion measured 100ft x 30ft. The building included a distinctive ‘tudoresque dutch gable and oriel window’ at the corner of William Street South and Montgomery Street.

During 1902 the company replaced existing buildings at William Street South with a new three-storey warehouse. The addition was also designed by Robert G. Watt (although this time as part of Watt & Tulloch). McLaughlin & Harvey carried out the building works.

Watt & Tulloch designed an office extension to the rear in 1909. The building contract (£23,015) was awarded to Robert Corry and completed in the same year.

By 1914 the firms largest export markets included the United States, Argentina, Brazil and Chile. The war years substantially reduced export trade although the firm recovered and continued to trade from William Street until 1975 when the building was sold and production moved to Ravenhill Avenue. The firm merged to become Ross Cochrane & Co. Ltd until Cantrell & Cochrane (C&C Group) acquired the remaining assets of Ross Cochrane & Co. Ltd in 1986.

During the late 1970s the building was converted into retail units known as Central Arcade with a collection of local retailers including Crazy Prices and Stewarts Winebarrel.

Ewart PLC acquired the complex and submitted a series of planning applications in 1988 and 1989 to alter, extend and refurbish the building. Work to convert the building into a shopping centre took place during 1990 – 1991 (z/1991/2101). The £5m project was designed by Ostick & Williams and Ferguson & Wheeler. The three-storey shopping centre opened in 1991 as Ross’s Court and comprised 44 tenants during the early 1990s. The top floor was a food court fitted-out in decorative brass and wood.

Ewart gained vacant possession of the centre in August 1997 following a buy-out of the remaining tenancies for £300,000 and in January 1998 the developer announced that the entire building would be let to Argos.

The Irish Times reported in March 2001 that Ewart had agreed to sell the building for £6.3m and noted that the building was valued at £1.9m prior to refurbishment and letting to Argos. The building was sold in May 2001.

The Argos store at Ross’s Court closed in March 2020.

CBRE placed the building on the market in February 2022 with offers invited in excess of £5.75m.

The Martin Property Group acquired the building from Aberdeen Asset Management in June 2022. 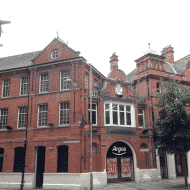 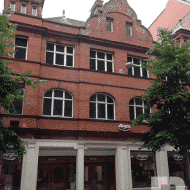 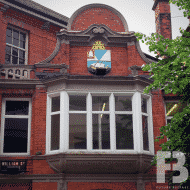 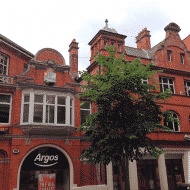 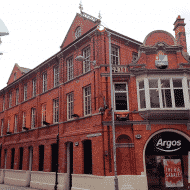