Riddel’s Warehouse is a four-storey building constructed 1865 – 67 by Thomas Jackson & Son for John Riddel & Son. The warehouse sold cast iron manufactured at the Musgrave Iron Foundry until it relocated in the 1960s. The building was later acquired as part of Musgrave Street Police Station and served as a store room ‘security buffer zone’ during the Troubles.

The building was placed on the market by BTW Shiells in October 2013 inviting offers in the region of £350,000. In September 2014 it was announced that, with financial assistance from Ulster Garden Villages Ltd, the Hearth Revolving Fund had purchased the building. Hearth intends to raise £3m to redevelop the B1 listed building as an art gallery for the Royal Ulster Academy. At the time of the announcement Lambert Smith Hampton confirmed that “45 individuals or companies expressed an interest in the building, with further interests in a mix of residential, office and leisure facilities..[and]… when it got down to the bidding stage, there was a publican, a residential property company, a housing association and Hearth“.

According to Marcus Patton’s Historical Gazetteer the building is in: “very black ‘white Glasgow brick’ with three types of stone, and polychrome brick decoration. Ground floor on plinth of Newry granite, arcades of roundheaded arches with reveals richly carved in water-lilies, ivy, columbine and shamrock, supported on squat piers with bunches of flowers for capitals, and roundels of floral rosettes in the spandrels between the arches; rope mouldings and keystones to first floor windows; banded red and black brick arches to upper floor windows; deep cornice in cream brick and sandstone; brick gable chimneys. Riddell’s business was established in the 1830s, and this building, whose ‘vast stocks of iron and steel, tinplate [and] the celebrated products of the… Magnolia Anti-Friction Metal Company of Great Britain’ could be viewed from five galleries lit by a glass roof, cost £6000 to build.” 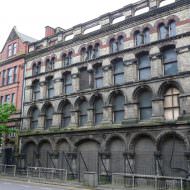