A four storey office building designed by Kendrick Edwards and built by Thomas McKee between 1934 – 1935.

The site was previously occupied by three 4-storey red brick buildings, one of which was occupied by the Linenhall Hotel. The terrace was demolished and replaced by Imperial House.

The building was grade B1 listed (BH26/50/190) in February 1990. The original facade material of matt white terracotta tiles was replaced with stone and original art-deco detailing removed. Following re-evaluation by NIEA the building was de-listed in August 2015.

The building was acquired Connis Property Services Ltd (Finbrook Investments) in November 1999. Alan Cook Architects was appointed to establish the feasibility of providing additional floors on top of the existing four storey building. A proposal was considered comprising two glass towers on top of the existing structure. The proposal was not progressed when it was established that the original steel framed structure and foundations were not robust enough to carry the proposed additional floors.

The building was extensively refurbished and renovated in 2003 by Alan Cook Architects, McDowell Electrical Installations and Philip Rodgers Interior Design.

A Centra convenience store opened in the former Santander unit in October 2019. The store was fitted out by Cloane Construction during September 2019.

Lambert Smith Hampton placed the property on the market in May 2022 seeking offers in excess of £6.9m. 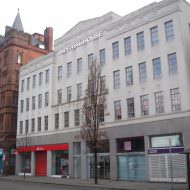 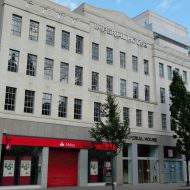