Extensive refurbishment works were carried out during 1993 by E.A. Lonergan. 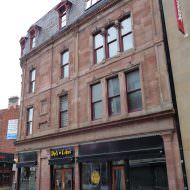