Built c1969 as a 7-storey office building for the Youth Employment Service. A planning application (Z/1990/2881) submitted in October 1990 by Durham Developments Ltd proposed to convert the vacant office building into sheltered housing accommodation comprising 39no. single person units. The application was approved in February 1991. McDowell Graham Architects oversaw the redevelopment of the building for Belfast Improved Houses between 1993 – 1994.

BIH Housing Association and Boyd Partnership Architects submitted a planning application (Z/2001/1177/F) in May 2001 proposing to re-clad the building. The application was approved in August 2001 and works were completed by 2002.

Helm Housing Association and Michael Burroughs Associates submitted a planning application (LA04/2016/0027/F) in December 2015 proposing to demolish the existing building and develop a 7-storey building comprising 34no. apartments (21no. 1 bedroom and 13no. 2 bedroom) and a rooftop garden. The application was approved in October 2016.

McCormack Demolition removed the building’s cladding that was installed c.2001/02 during September – October 2017.

A recent update to NIHE’s Social Housing Development Programme notes that the construction start date has been amended from 2017/18 to 2018/19. 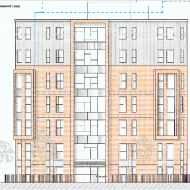