A six-storey portland stone clad building with ground floor banking hall and offices above. Designed by Robert J Greenslade of Building Design Partnership and built by F B McKee & Co Ltd for the Northern Bank.

The building was extensively refurbished and an additional storey was added during 2008. Works commenced in May 2008 and were completed in March 2009. Works were overseen by JCP Consulting and the main contractor was McLaughlin & Harvey, supported by Harvey Group as M&E contractor.

The current building replaced a five storey bank building designed by Young & MacKenzie and built c1903 for the Northern Bank. The former bank and adjoining buildings were demolished in 1971.

Danske Bank constructed a new ground floor entrance lobby at the corner of Donegall Square West and Wellington Street during early 2017. The work was overseen by Todd Architects and completed by McCue Fit-Out and included internal refurbishment of the ground, mezzanine, first and fifth floors. 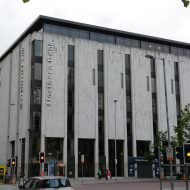