Belfast’s Custom House is a symmetrical two-storey building, with basement and attic, designed in an Italianate Palazzo style by Sir Charles Lanyon. The building was designed by Lanyon in 1847 and built by D. & J. Fulton between 1854 – 1857 at a cost of £30,000. The building hosts a number of decorative carvings including three figures on the eastern elevation symbolising Neptune, Mercury and Britannia. Also on the eastern elevation are figures representing Manufacture, Peace, Commerce and Industry. All were carried out by Samuel Ferres Lynn and Thomas Fitzpatrick.

The Board of Works appointed an unknown architect and contractor in 1861 to carry out alterations to the building. The works comprised the raising of the forecourt area between the north and south wings to provide additional space at basement level and to create a new entrance to the west side of the central block.

The Custom House continued to be administered by the Belfast Board of Works until c1930 and during this time it was occupied by organisations such as the Inland Revenue, Income Tax, Post Office, and Mercantile Marine.

Significant structural renovations were carried out in 1926 due to the settlement of the central and south blocks. The interiors of these blocks were removed, including many original features, and a new second floor level was inserted. The original chimneys were removed and the main entrance portico on the east elevation was built up.

Another significant renovation took place in 1940 when a new staircase was installed in the north block.

The exterior of the building was cleaned and repaired in 1983; a security pavilion was installed at the west entrance to the central block in 1987 (Z/1987/2517), and in 1989 most of the roof was retiled and uPVC glazing was installed.

A further renovation and refurbishment project c1996 was carried out by John Neil Partnership, assisted by Dawson Stelfox Conservation.

HMRC entered into a PFI agreement in April 2001 that transferred “ownership and management” of its UK wide estate portfolio, including Belfast’s Custom House, to a Bermuda based company called Mapeley STEPS Ltd. Under the terms of the deal Mapeley provides serviced accommodation to HMRC for a period of 20 years. After April 2021 the properties, including the Custom House in Belfast, are retained by Mapeley STEPS Ltd. During the period 2001 – 2021 HMCE holds the leasehold on the Custom House building and pays rent to a UK based company called Mapeley Steps Contractors Limited.

HMRC announced in November 2015 that it would be closing 137 offices across the UK by 2027 and establishing new regional offices. HMRC is currently searching for a new regional office location in Belfast, meaning that it will vacate the Custom House building by at least 2021 when the PFI contract with Mapeley expires. 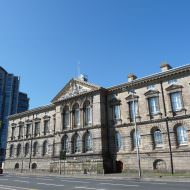 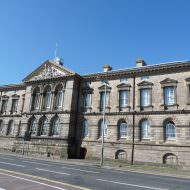 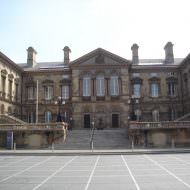 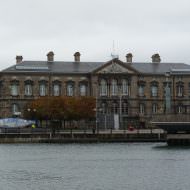