Lyons Architects led a refurbishment of the building in 1996, including alterations to the building frontage (permitted under Z/1994/2508).

The building has been owned by Cathedral House (NI) Ltd since at least 2004.

In March 2014 the office accommodation was rebranded CQHQ. Previously it was known as the Belfast Business Centre.

A cafe / deli opened within the ground floor unit in June 2016. Quartisan traded until 2017 when it closed for refurbishment. Quartisan is scheduled to reopen in February 2018 as a licensed restaurant. 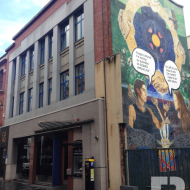