Southern Lights submitted a planning application (Z/1995/2309) in May 1995 proposing to change the use of the building from a health club to shops and offices. The application was approved in September 1995 and work to convert the building was completed during 1996.

Southern Lights submitted a planning application (Z/1999/2677) in September 1999 proposing an additional floor on the existing office building. The application was approved in January 2000 and the additional fourth floor was added to the building during 2000.

McKibben Commercial placed the property on the market during September 2018 with offers invited in the region of £2.5m. 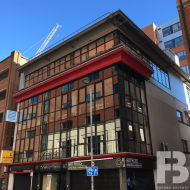