The Bank Square Public Realm works were part of DSD’s Belfast Streets Ahead Programme and was the first project to be implemented from DSD’s Westside Regeneration Masterplan, published in September 2009. Public consultation took place in February 2010 a planning application was submitted in March 2011. Following approval in February 2012 and allocation of funding the construction contract was awarded to FP McCann in June 2013 and works commenced in July 2013, completing in December 2014. 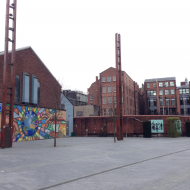