A five storey building at the corner of Royal Avenue and Rosemary Street comprising ground floor bank and office accommodation above.

The building was owned by Alterity Investments (previously Deramore Property Group) until Cordatus Real Estate acquired the building in May 2016 for £6.6m.

HSBC Bank has occupied the ground floor since December 2008.

This is the site of the Royal Avenue Hotel (1882 – 84) demolished after a fire in 1984. The hotel was a four storey Italianate building designed by Thomas Jackson & Son. 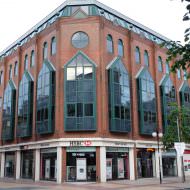