A residential scheme comprising 33no. timber frame houses and 8no. apartments. The site was developed by Kevin Watson Construction Ltd for Fold Housing Association under a design & build agreement between 2015 – 2016.

The 1.87 acre site was previously occupied by a 46,000ft2 factory / warehouse building built in the 1960s for Cantrell and Cochrane.

The site was acquired at auction by PWL Developments for £2.275m in June 2004. PWL and Halliday Ramsay submitted a planning application (Z/2004/2728/F) in November 2004 proposing to develop 112no. apartments. Planning Service issued a decision to refuse the development. The developer subsequently reduced the scheme from 112 apartments to 100 and reduced the tallest block from five to four stories. On appeal the Planning Appeals Commission recommended planning permission be granted (PAC ref: 2005/A022).

PWL sold the site to Kevin Watson Properties Ltd in July 2006 and in September 2006 Kevin Watson Construction Ltd and McGirr Architects submitted a planning application (Z/2006/2214/F) proposing to develop 169no. apartments (145no. 2 beds and 24no. 1 beds) with basement car parking. Planning Service approved the application in January 2009.

Kevin Watson Construction Ltd and GMK Design submitted a revised planning application (Z/2011/0022/F) in January 2011 proposing to develop 150no. apartments. The development proposed was based on the 2006 proposal less 16no. apartments at ground floor to remove the proposed basement car parking and accommodate all parking at ground level.

In June 2014 the undetermined 2011 planning application was revised for a proposed social housing scheme comprising 41no. units (8 no. apartments and 33 no. houses). The revised application was approved in December 2014.

Fold Housing Association entered into a design & build agreement with Kevin Watson Construction Ltd to develop the 33no. timber frame houses and 8no. apartments. Construction commenced in 2015 and completed in August 2016. 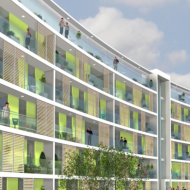 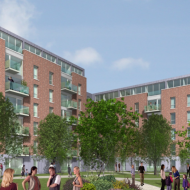 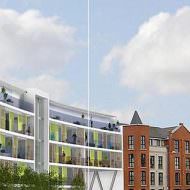 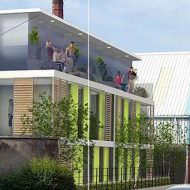 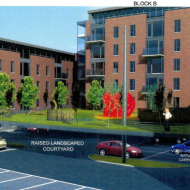 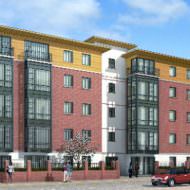 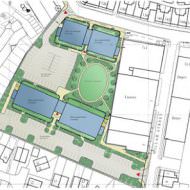