A four storey building, with attic, designed by William J. Fennell in Dumfries red sandstone for George Tate, rent agent. On completion in 1885 the ground floor was divided into two commercial units (George Tate occupied one) and the upper floors were rented for office use.

The ground floor was converted into one single unit during the early 20th century and by the 1950s it was occupied by Jean Millar Ltd; the bridal shop continues to occupy the ground floor retail unit. 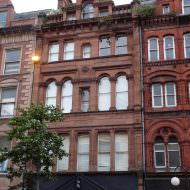