A planning application (Z/2000/1824/F) submitted in April 2000 by Mr Eamon McCusker and Rosetta Design Services Ltd proposed internal and external alterations to the building. The application was approved in October 2000.

A planning application (Z/2004/1166/F) submitted in May 2004 by Mr Eamon McCusker and Hartmann Design Associates proposed external alterations and refurbishment of the bar / restaurant. The application was approved in November 2004.

The building was occupied by a series of restaurants over recent years. AM:PM until c2010. Lost Society occupied the building from February 2011 – October 2011. Rainbow operated briefly during late 2012. The building was vacant since early 2014 – late 2015.

Boojum leased the entire building on a 10 year lease from June 2015. Pure Interior Fit-Out prepared the building during Oct / Nov 2015 and the burrito bar opened in November 2015.

Osborne King placed the building on the market in April 2017 seeking offers in excess of £450,000. 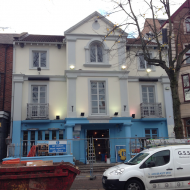