A 5-storey building built 1883 and redeveloped 2006. A large fire caused substantial damage to the structure of the original building during the early hours of 14th October 2004. Following the fire the building owner, Milestone Trust Ltd, submitted a planning application (Z/2005/0371/F) in March 2005 proposing demolition of the building interior, refurbishment of the fire damaged building facade and a replacement roof. The application was approved in July 2005. A further planning application (Z/2005/1769/F) by Milestone Trust Ltd in August 2005 proposed the sub-division of the ground floor to form 2no. retail units and change of use of the upper floors from office to retail use. The application was approved in November 2005.

Redevelopment works commenced in 2006 and were completed in September 2007. WDR & RT Taggart designed the scheme and work was carried out by McLaughlin & Harvey. The total project value, including fit-out of a 28,000ft2 H&M store, totalled £10m. The building re-opened in November 2007. 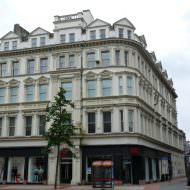