Lipton Ltd operated a grocery store at no.56 from at least 1950 and extended store rooms into no.3 from the late 1950s. J&J Foods took over the unit during the early 1970s and operated a supermarket from the ground floor of the building until the early 1990s. 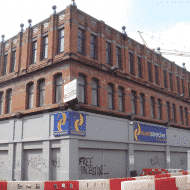