A five-storey building dating from the 1930’s. The building was extensively refurbished in 2009 to provide 8no. apartments over a ground floor commercial unit.

In November 2013 five of the apartments were offered for sale as one auction lot by BTW Shiells (the remaining three had previously been sold). The five apartment were purchased in December 2013. 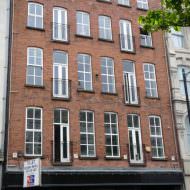