A five-storey building built 1930 – 1932 with ground floor commercial arcade connecting to Fountain Street and offices above.

The building was initially know as Riddels Arcade. Riddel’s were hardware merchants and ironmongers. Between the fourth and fifth floor there are two sculptural details representing a hand and anvil – a reference to Riddels.

The building was later known as Brands Arcade after the well known Belfast store established by Tom and Margaret Brand. The monogram ‘B’ can be found between fourth and fifth floors – a reference to Brands. The building continued as an arcade between Donegall Place and Fountain Street with shops along the ground floor arcade and offices and wholesalers on the upper floors. At one stage the arcade was known as Birdcage Walk.

Brands closed their premises within Brands Arcade in September 1989. The section of the building fronting Fountain Street was redeveloped between 1990 – 1991 to provide ground and first floor retail space and office accommodation above. The Fountain Street section was known as Brookmount Buildings during the 1990s and is now known as Lesley Tower. The section of the building fronting Donegall Place was occupied by Penneys from the 1980s and by the 1990s it was occupied by Top Shop. Top Shop relocated to Victoria Square in 2008.

Donegall Place Investments Ltd sold 49 Donegall Place and 42-46 Fountain Street (known as Lesley Tower) to Woodberry UK Capital Ltd for £8.6m in September 2017. The office accommodation is due to be refurbished by mid-2018. 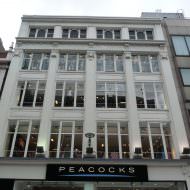 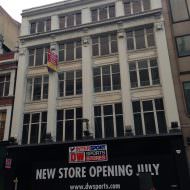