From the 1870s until the 1920s this was the site of the Mariner’s Church of Ireland. During the early 20th century the Mariners’ Church National School also occupied the site.

At some stage during the 1920s the site became the premises of Lees, Hyman & Lees, furniture manufacturers. The building was demolished (possibly as a result of the Blitz) during the 1940s.

The current four storey building was built in 1950 and continued to be occupied by Lees, Hyman & Lees Ltd until at least the 1960s.

The building was placed on the market by McKibben Property Consultants in January 2018 with offers invited in the region of £2m. The marketing brochure notes that the building extends to 24,800ft2 and sits on a 0.21 acre site. The ground and first floor are occupied by United Optical Laboratories Ltd until November 2018; the second floor is occupied by Orchid Studios (holding over) and the third floor is occupied by Flax Art Studios (holding over).

The building sold during late 2018. 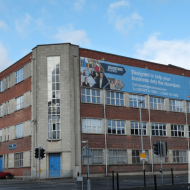