Todd Architects were commissioned in 1989 to design the building in a contract worth £2.5m for Tetra Enterprises Ltd. The building was constructed during 1990 and was completed for tenants to move in during 1991.

The Design Centre was acquired by Dunloe Ewart during early 1998 and fully refurbished and rebranded as ’39 Corporation Street’. The entire 38,000 ft2 was let to Northbrook at approximately £12 per ft2.

Dunloe Ewart then placed the building on the market in September 1999 seeking offers over £6.5m. The annual rental at the time was £460,000 per annum. The building was purchased for an undisclosed sum.

The building was placed on the market by DTZ McCombe Pierce in May 2015 with an asking price of £4.35m. Sales material notes that the Department of Finance & Personnel have a lease from January 2014 at a yearly rent of £415,000 for 7 years. The building was sold during the second half of 2015 to Wirefox for £4.8m. 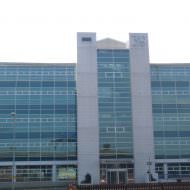