A 4-storey office building built c 1970. The Allied Irish Bank occupied the building since at least 1985 with a ground floor bank branch.

After the First Trust Bank was established in 1991 the bank took over the ground floor unit.

The building was placed on the market by Lambert Smith Hampton in August 2017 with offers invited in the region of £2m. 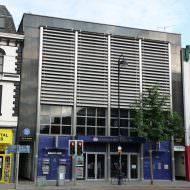