No. 28 Cornmarket was occupied by George McAfee, boot maker, from November 1880 until c1915 when Stephens & Bourke (Belfast) Ltd took over the business. The property continued in use as a boot / show retailer until at least the 1960s.

During the 1990s and 2000s the building was occupied by clothing retailers.

Herclose Investments owned the building from at least 1971 until the building was sold in December 2013 in an ‘off-market deal’ to a local NI based investor. In February 2014 work began on the refurbishment of the building to be re-let as retail space. Dr Marten’s footwear opened within the refurbished building in June 2014. 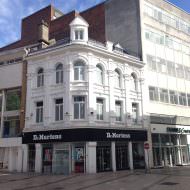