Sophia Restaurant opened in September 2015 and closed late 2018. The unit is now vacant.

Drumard Trading Ltd signed an agreement with Romacorp Inc in 2004 to operate Tony Roma’s restaurants in Ireland and a restaurant opened at 25/27 University Road.

Castle Street Inns Ltd, owner of the property, was placed into administration in January 2011. The administrator (KPMG) sold the property for £300,000 in July 2017 to HOLG Ltd.

Colliers placed the mid-terrace property on the market during autumn 2017. The advertising brochure advises that the property extends to c.8,548ft2 and is offered to let or for sale (asking price – £650,000).

The restaurant name changed from Tony Roma’s to Blaze and Glaze in February 2019.

HOLG Ltd and Teague and Sally Architects submitted a planning application (LA04/2019/1523/F) in June 2019 proposing convert the existing buildings at 25-29 University Road to 20no. apartments.

The NI Fire Service responded to a fire at 25-27 University Road just after 1am on 21st January 2020. Nine fire appliances and fifty-five firefighters attended the incident. A police statement later that day noted that “the fire is being treated as a deliberate ignition”.

HOLG Ltd and Carlin Planning submitted an application (LA04/2020/0392/DCA) in February 2020 proposing to demolish the first and second floors with facade retention of ground floor front and rear walls.

DTZ McCombe Pierce placed the property on the market in 2017 with offers invited in the region of £275,000. The advertising brochure advises that the property extends to c.1,800ft2. 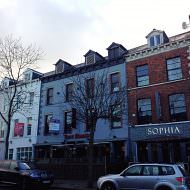 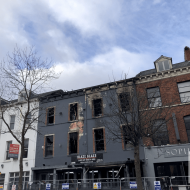 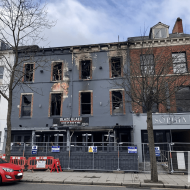