A five storey office building with ground floor retail, built some time during the 1960 / 70s.

The building has been owned by Murlough Investments Ltd since at least 1996. 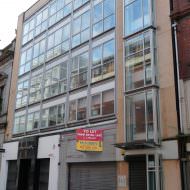