Currently a 0.02 ha. vacant site. Previously occupied by a three storey building built c1840 and demolished c2000. Around c1900 this was the site of the Central Hotel.

A planning application (Z/2002/2277/F) submitted by Prosody Ltd and RMI Architects in 2002 proposed to develop an office building comprising c10,000 ft2 over eight floors. Planning permission was granted in November 2003 and expired in November 2008 without development commencing.

A planning application (Z/2015/0024/F) submitted by Galgorm Properties and Warwick Stewart Architects in January 2015 proposed to develop a six storey office building. The application was refused in February 2016. The applicant lodged an appeal to the Planning Appeals Commission in May 2016 and an informal hearing took place in September 2016. The PAC determined in November 2016 that the “proposed development would adversely affect the setting of the listed building and unacceptably damage the built form and appearance of the area” and the appeal failed. 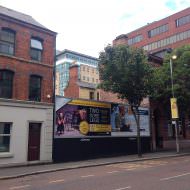 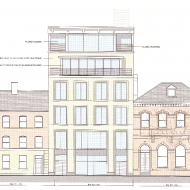