A terrace of three storey buildings dating from the early 20th century.

O’Connor Kennedy Turtle placed the terrace on the market in June 2022 with an asking price of £1m. 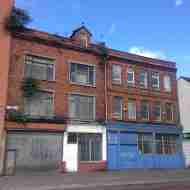