No.128 was placed into receivership in April 2013 and placed on the market by Colliers. The property sold in early 2016.

Ms Nicola McAlister and Like Architects submitted a planning application (LA04/2015/1050/F( in September 2015 proposing to convert the upper floors to 2no. apartments and retain the ground floor retail unit. The application was approved in December 2105. 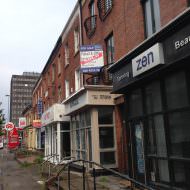