A terrace of three storey properties dating from the 1840s.

No.14 Church Lane has been a licensed premises since the late 1940s. The bar was known as The Boreen from the 1960s until the early 1990s and was often referred to as Belfast’s smallest pub.

During the 1990s the pub was renamed The Glass Jar.

JK Pubs Ltd and Clyde Shanks submitted a planning application (LA04/2016/0996/F) in April 2016 proposing to change the use of no.16 Church Lane from retail to pub / restaurant, alter the front facade and amalgamate with adjacent restaurant. The application was approved in September 2016.

JK Pubs entered into a lease with Pryor Investments Ltd for the property at no.16 Church Lane.

Construction work commenced in October 2016 and the extension at no. 16 Church Lane opened in February 2017. The ground floor trades as Pablos and the first floor is an extension to Muriel’s bar.

JK Pubs and O’Donnell O’Neill Design Associates submitted a planning application (LA04/2018/2571/F) in October 2018 proposing to change the use of no.18 Church Lane from retail to bar / restaurant, extend to the rear at second floor, create a new entrance and shopfront and amalgamate with no.16 Church Lane. The application was approved in September 2019 after a proposed roof terrace was omitted from the proposals. JK Pubs will lease no.18 Church Lane from Pryor Investments Ltd.

Construction work on the extension into no.18 Church Lane commenced in January 2020. 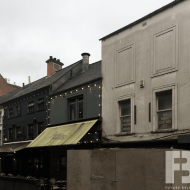 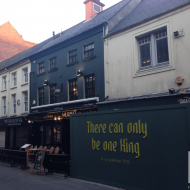