The building comprises c5,300 ft2 over basement, ground and three upper floors. It was built in 1958 to a design by Houston & Beaumont Architects.

Previously on the site was a four-storey building dating from the late 19th century.

Graham Tiso, an outdoor clothing and equipment retailer, operated from the current building from 1996 until closing in December 2012.

The property was occupied by a number of temporary retailers between 2013 – 2016.

Jewellery retailer Pandora commenced fit out of a new store in May 2022 to open in June 2022. 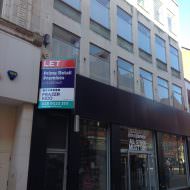