The current Yorkgate train station opened in October 1992 to replace a previous station at York Road. Around 480,000 passengers use the station annually (2018/19 data).

Translink announced plans to redevelop the station during summer 2020 and launched an online consultation website at www.yorkgatestation.co.uk to provide more information.

In addition to a new 550m2 station building the proposals also include a new footbridge between platforms, increased platform width, new canopies to platforms and upgraded public realm to the York Road frontage.

Translink submitted a planning application (LA04/2020/1974/F) in September 2020 proposing to develop a new train station building, footbridge and platform canopies, cycle parking, bus and taxi drop off area and new public realm. The application was approved in May 2021.

Construction is programmed to commence during 2022 and take approximately 18 months to complete.

The original York Road Train Station was designed by Charles Lanyon for the Belfast & Ballymena Railway (known as the Belfast and Northern Counties Railway from 1860) and opened in 1848.

The station building and adjoining tram terminus and hotel were severely damaged in April 1941 during the Belfast Blitz. The station frontage was rebuilt in 1942 and the station continued to operate despite proposals in 1944 and 1968 to demolish and replace on an alternative site.

Significant damage was caused by a bomb exploding on the concourse in July 1972. The station closed permanently in 1975 when a new station building opened nearby. The original York Road Train Station building was demolished in 1976. 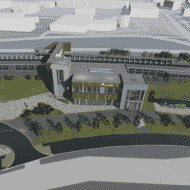 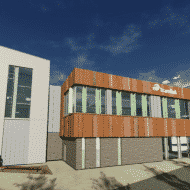 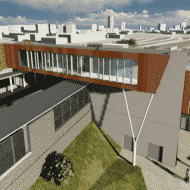