A works contract valued at £48,474 was signed with Stewart & Partners and works commenced in November 1932. The building was steel framed with the steelwork being fabricated at Harland & Wolff.

An official opening event was held on 25th November 1935 with the Postmaster General and then Prime Minister of Northern Ireland, Viscount Craigavon.

The building was originally L-shape on plan although an extension in 1959 formed a square block. At the same time a seventh story extension with pitched roof was added across the whole building.

The building was bomb damaged in 1989. 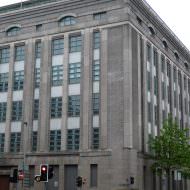