A four-storey building designed by Thomas Jackson & Son and built by H & J Martin in 1881 for Mssrs. Wheeler & Whitaker who owned the building until at least the 1920s.

St. George’s Hall, a double height space, is located to the rear of the building above the ground floor licensed premises at 4 Joys Entry (McCracken’s). The hall was initially used as a restaurant and the Belfast Apothecaries Hall. It hosted the first full-time cinema in Belfast (capable of audiences up to 1500 people) from August 1908 but later closed in 1916. The first cinema screening was Bluebeard on 17 August 1908. By the 1960s it was used as a dance hall and the Ulster Sports Club operated a boxing club that also hosted competitive tournaments.

Following bomb damage in the early 1970s the building lay derelict until an extensive refurbishment by Deramore Developments in 1981.

Osborne King placed the central and right section of the building (c.15,000ft2) at 37 – 41 High Street on the market in 2015 with offers invited over £800,000. As at July 2017 the building remains on the market with Osborne King. The vendor, O’Hare Solicitors, occupies part ground and upper floors. 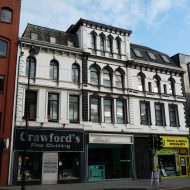