A six-storey building with basement and attic-storey, designed by Young & Mackenzie Architects for The Scottish Provident Institution and built primarily in sandstone by Robert Corry in two phases between 1897 and 1902.

The building’s ornamental carvings, including female heads, representing Ireland, Scotland, England, India, Sudan and Canada were carried out by Purdy & Millard. Sculptures also depict the prevalent industries at the time of construction, including shipbuilding, rope making and weaving.

The building was grade A listed (HB26/50/012) in June 1979 and during 1982 – 1983 the external stonework was restored, a projecting canopy installed over the Donegall Square West entrance, and some of the building’s statues were removed.

Extensive refurbishment of the building, including the interior, exterior and roof, was undertaken during 2009. 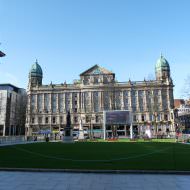 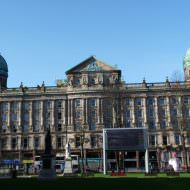