A three-storey red sandstone building designed by W H Lynn for the Belfast Corporation and constructed by H & J Martin. The internal iron staircase is by Brawn of Birmingham.

Following the adoption of the Public Libraries Act in 1882 the Belfast Corporation prepared to build Belfast Central Library. A competition was held and in 1883 the contract was awarded to W H Lynn who was given a budget of £15,000 for the building and £3,000 for internal fittings.

The foundation stone was laid in 1884 by the Lord Lieutenant but the building was not completed until 1888 due to a materials delayed in delivery and a series of strikes. The building officially opened in 1888 as the first free public library in Belfast and in the first year the Newsroom saw 895,000 users.

A museum and art gallery occupied the top floor until the 1920s and the Corporation hosted many civic events here before the City Hall opened in 1906.

The Library was extended in 1962 by a seven-storey rear extension and in 1980 a further extension to the rear was opened (this was not connected to the main building until a link was built in the 1990s). A disabled access entrance was created in the 1990s at Library Street.

Formerly run by Belfast Corporation, it has been run by the Belfast Education and Library Board since 1973.

The building was damaged during the 1941 Blitz and a nearby bomb in 1976. In February 2007 pieces of masonry were found on Kent Street alongside the Library. This prompted an investigation into the condition of the sandstone facade and a number of loose fragments were removed. Safety nets were erected around the facade and a £940,000 refurbishment of the exterior facade was initiated.

H & J Martin and Patton Construction were awarded the refurbishment contract in a joint venture which was completed late 2010.

In September 2011 it was reported that the library would not receive £20m to refurbish the interior of the building.

On 17 September 2013 the Culture, Arts and Leisure committee proposed a motion that the Assembly “recognises the economic, cultural, social and educational benefits that a regional library for Northern Ireland would provide; and urges the Minister of Culture, Arts and Leisure to engage with Executive colleagues and other partners to pursue Belfast Central Library’s redevelopment plan to create a regional library as part of the overall ‘Library Square’ project.”

The redevelopment proposals for Belfast Central Library are being designed by Todd Architects under the strategic partnership that exists between Libraries NI, Belfast Education & Library Board and Amey FMP. The redeveloped library will be accessed from Library Square and visitors will enter a three storey glazed entrance hall linking the original red sandstone building with a modern extension. The project is estimated to cost up to £40m.

The Minister for Culture, Arts & Leisure confirmed in February 2014 that “Libraries NI is currently preparing an Outline Business Case in order to provide an objective assessment of the costs and benefits of any potential investment. This Case must evaluate the full range of options for redevelopment including upgrading the existing building or transferring to an alternative location in the city. Work on the Case is still in progress and I understand that Libraries NI hopes to be in a position to submit it to DCAL for consideration in early spring 2014.”

Libraries NI confirmed in February 2016 that a business case had been submitted to the Department of Finance and Personnel (DFP) in November 2015 proposing redevelopment of the Central Library site at a cost of £32.5 million. 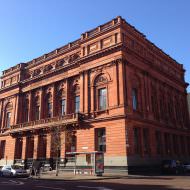 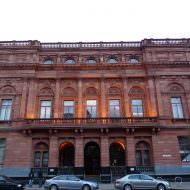