6 Whitla Street was previously occupied by a four-storey building designed by Berkeley Dean Wise. The building, known as the Station Hotel, was built in 1898 for the Belfast and Northern Counties Railway. It subsequently became the Midland Hotel for a number of years post WWII; operated by London, Midland & Scottish Railway and later the Ulster Transport Authority. The building was then sold to a private developer and converted into office accommodation.

Bloomfield Developments (NI) Ltd and Wandsworth Architecture submitted a planning application (Z/2007/0137/F) in January 2007 proposing demolition of the existing Midland Building and development of 88 apartments over 10 floors, above 2 parking levels (one partially underground). The application was approved in July 2007. Development did not proceed and the permission expired in July 2012.

In February 2010 Wilson Developments (NI) Ltd, via their website, stated that they “are working on an appraisal for a … mixed-use development consisting of circa 40,000ft2 of office space, a 176 bedroom hotel and associated amenities, an adjacent building with 23 apartments and retail unit on the ground floor, all with parking facilities.”

The Midland Building was placed on the market in February 2015. The agents, GVA NI and OKT, invited offers over £350,000. 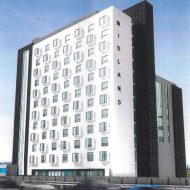 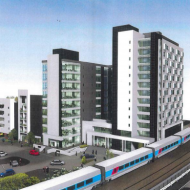