Originally two separate buildings built 1867 – 1868; no.34 for John Lytle & Sons and nos.36-38 for Samuel McCausland. Both designed by William Hastings and built by the Fitzpatrick Brothers.

Both seed merchants continued to operate from the buildings until relocating in the early 1970s.

The buildings were acquired by DoE Roads Service in 1975 and proposed for demolition until DoE Historic Buildings branch listed both in 1981 (ref: HB26/50/046). The Laganside Corporation acquired the buildings and held a development competition which resulted in a developer being selected to redevelop the buildings.

Landmark Hotels (Dublin) acquired the buildings and carried out extensive refurbishment works, combining both buildings and converting to a 60 bedroom hotel. The £4m hotel scheme was designed by Architects Edmondson Cosgrove Robinson and works were carried out by Farrans Construction between Spring 1997 – November 1998. The McCausland Hotel opened on 1st December 1998.

Malmaison (Belfast) Ltd acquired the hotel building in July 2004 and appointed McCue Fitout to undertake a £2m refurbishment/ rebrand between July 2004 – November 2004. The hotel reopened as the Malmaison Hotel, with 64 bedrooms, in December 2004.

The Malmaison Hotel received a £250,ooo refurbishment in autumn 2011. McCue Fitout carried out the works. 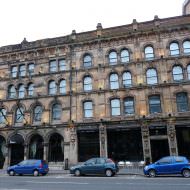