A six-storey office building with ground floor commercial units. Lombard House was opened on 18th November 1992 by Environment & Economy Minister Robert Atkins. The building was designed for Martin Estates by Lyons Architects and constructed by H&J Martin. The façade of the building extends outwards onto Lombard Street in a cantilevered bow.

The former Cornmarket branch of the Ulster Bank relocated to the ground and first floor of the building in early 1993. The Lombard House branch closed in late 2014.

The Martin Group refurbished the building internally during 2016.

Nos. 10 – 14 Lombard Street was previously occupied by Robb’s Department Store. The five-storey building was designed by William Hastings at the corner of Castle Place and Lombard Street in 1874.

Nos. 16 – 20 Lombard Street was previously occupied by the Irish Temperance League Buildings. The four-storey building was designed by Joseph Chandler Mars and built by Thomas McArthur in 1877 at a cost of £3,500. The ground floor temperance cafe operated from 1877 until 1966. 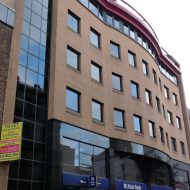 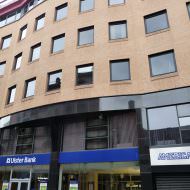 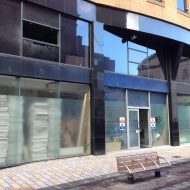