A five-storey office building built 1961 – 1962 for Prudential Assurance Company at the corner of Wellington Place and Fountain Street. Known as Prudential House until being renamed Lesley Buildings.

Previously on the site was the five storey Prudential Chambers, built 1912 – 1913 for Prudential Assurance Company. The building was designed by London based architect Paul Waterhouse and carried out locally by Belfast based Young & Mackenzie.

The building was refurbished and an additional sixth floor added during 2004 by Herbel Properties Ltd and Coogan & Co Architects (ref:Z/2003/1147/F).

The building was acquired by Gortalowry Developments Ltd in October 2016 for a reported £8m.

Marcon commenced work during February 2018 to fit out the Tim Hortons unit at the corner of Fountain Street / Wellington Place.

The remaining unit at Fountain Street will be occupied by Bob & Berts during spring 2018. 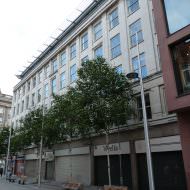