A seven-storey building located at the corner of Howard Street and Brunswick Street. Designed by Young & Mackenzie for the Presbyterian War Memorial Hostel. Piling and foundations by W.J. Campbell & Son and construction of the building by F.B. McKee & Co. at a cost of £50,000. The foundation stone was laid on 23rd May 1923 by Earl Beatty, 1st Lord of the Admiralty (now on view within Flame Restaurant) and the building was opened on 9th June 1926 by Frank Workman.

The building was occupied by the Presbyterian War Memorial Hostel until the early 1970s. The hostel was extended in 1963 with the construction of Brunswick House on an adjacent site at Brunswick Street, formerly a linen warehouse.

The Presbyterian Church placed the former Presbyterian War Memorial Hostel building, along with the adjoining Brunswick House, on the market in November 1997. Both buildings were purchased by Killultagh Estates in March 1998 for £2,446,519.

A planning application (LA04/2016/1277/F) submitted in June 2016 by Hollandale Projects Ltd and MKA Planning Ltd proposed to convert the upper floors of the building to provide 55no. serviced short stay apartments and a private roof terrace. The application was approved in December 2016.

Construction works commenced in April 2017 and are due to complete during 2018.

Martin Property Group submitted a planning application (LA04/2018/1744/F) in March 2018 proposing change of use (and minor amendments to room layouts approved under LA04/2016/1277/F) from former offices on fifth and sixth floors to 17no. bedroom hotel, reception on seventh floor and new public hotel rooftop café/bar. Ground to fourth floor to be developed as per LA04/2016/1277/F for short stay / visitor suites.

The Flint Hotel opened during late June 2018. More details and photos at www.theflinthotel.com. 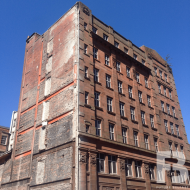 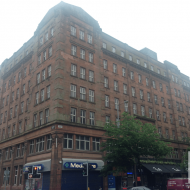 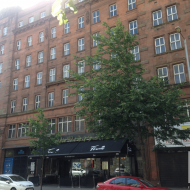