Killultagh Properties Ltd submitted a planning application (Z/2002/1735/F) in July 2002 proposing to develop an office building with ground floor retail units and basement parking. The application was approved in October 2003.

McAllister Homes submitted a planning application (Z/2006/2906/F) in December 2006 proposing to develop a 37no. storey residential building comprising 291no. apartments, 146 parking spaces, commercial space and gym facilities. The proposed building was known as The Aurora and would have been Belfast’s tallest building. The application was recommended for refusal in February 2009 but was then subject to a reassessment by the Planning Service Management Board. The Board recommended refusal in January 2010 and the application was formally refused planning permission in February 2010. The applicant submitting an appeal to the Planning Appeals Commission but this was later withdrawn in February 2011, prior to the scheduled appeal hearing in March 2011.

Anglo Irish Bank appointed a receiver to the Aurora site in January 2011 and was then placed under the control of the National Assets Management Agency (Nama).

The site was acquired by Lissan Coal Company Ltd. Lissan submitted a planning application in September 2011 proposing to construct a 24 hour unattended petrol filling station with five pumps, control room and ATM. The application was approved in September 2012.

Site hoarding was erected in August 2012 ahead of construction commencing in September 2012. The petrol filling station was completed in March 2013. 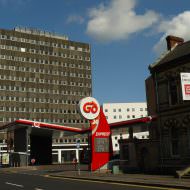