The Fountain Bar is a two storey public house built 1955 at the corner of Fountain Street and Fountain Lane.

The original 19th century Fountain Tavern building was substantially damaged during the 1941 blitz and was subsequently demolished. The site lay vacant until the Convery family (who had run the original Fountain Tavern since the early 1900s) rebuilt the bar in 1955. T. H. Convery Ltd continued to operate the bar until the 1960s.

By the late 1990s the bar was owned by Croft Inns who later sold the Fountain during 2002.

Kiltonga Properties then sold the building to JAR (Ire) Ltd during summer 2013.

The Clover Group announced a £1m refurbishment of The Fountain in May 2019. Clover will lease the bar from owner JAR (Ire) Ltd.

Clover Pubs NI Ltd submitted a planning application (LA04/2019/1162/F) in May 2019 proposing to refurbish the existing public house, extend into the adjacent former off-sales and alter the facades at Fountain Street and Fountain Lane. 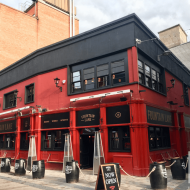 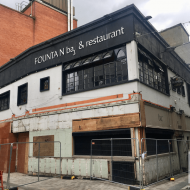 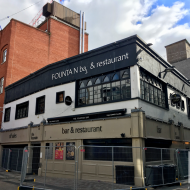 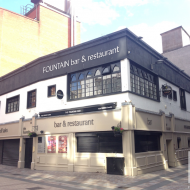 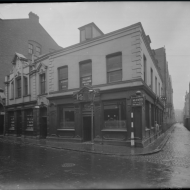 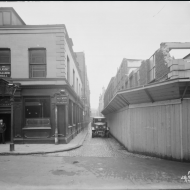