A 10-storey hotel building comprising 131no. bedrooms. The Fitzwilliam Hotel was designed by Halliday Ramsay Architects for Graffan Developments Ltd and built by Gilbert Ash between 2007 – 2009.

The site was occupied by four five-storey terrace houses between c1835 – 1905. The terrace was demolished and replaced by Bertie Crewe’s three-storey Royal Hippodrome building (1906 – 1907). The Hippodrome was acquired by The Rank Organisation in 1961 and renamed The Odeon. The original 1907 building was altered during the 1960’s with a corrugated metal cladding was attached to the facade and a flat roof installed (architect John McBride Neill). Following bomb damage in 1974 the building was sold to Belfast Cinemas Ltd and renamed the New Vic. By 1987 the building had been converted to a bingo hall and in August 1996 it was sold to Dunloe Ewart for redevelopment.

No development proceeded and the site was later sold to Graffan Properties Ltd who submitted a planning application (Z/2003/2484/F) in October 2003 proposing a seven storey office building designed by RMI Architects. The application was approved in July 2004.

No development proceeded and Graffan sold part of the site to enable the Grand Opera House to extend.

The Fitzwilliam Hotel opened on Friday 13 March 2009 under management of Hotel Partners. Graffan Properties retained ownership of the hotel until selling during summer 2015 to Hotel Partners. 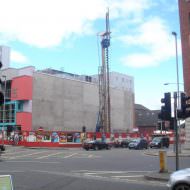 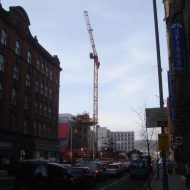 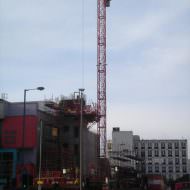 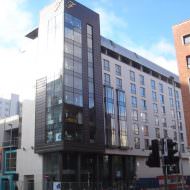