A twelve-storey hotel building built over a two-storey podium fronting Great Victoria Street. The hotel is built on the site of the Great Northern Railway Companys Belfast Terminus (1840 – 1970s). The Ulster Transport Authority appointed architects Sydney Kaye, Eric Firkin and Partners of London to design the 200 bedroom hotel. Farrans Construction commenced work to build the hotel during late 1969. The building was officially topped out on 18th December 1970; becoming the then tallest building in Belfast. The Europa Hotel opened in July 1971.

Grand Metropolitan Trading (hotel operators) rebranded the hotel The Forum Hotel in February 1983. The hotel was acquired by The Emerald Group in October 1986 and reverted back to the Europa name. The Emerald Group carried out a £1.7m refurbishment of all bedrooms in the hotel.

The hotel traded whilst in receivership during 1992. Hastings Hotel Group acquired the hotel for £4.4m in August 1993. At the time it was estimated that bombings had caused up to £3m worth of damage. The hotel closed for extensive redevelopment during late 1993. The £8m scheme was designed by RMI Architects and Graham Construction were appointed main contractor. The redeveloped hotel comprised 184no. bedrooms and 5no. suites and opened in February 1994.

Following the visit of former US President Bill Clinton on 30th November 1995 the hotel branded room 1011, the room Clinton stayed, the Clinton Suite. The suite officially opened on 1st July 1996.

A further extension in 2008 (ref: Z/2007/2972) designed by RMI Architects comprised an additional 35no. bedrooms. The extension increased the total number of bedrooms to 272. 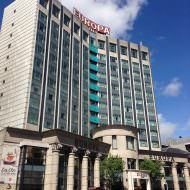 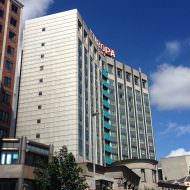 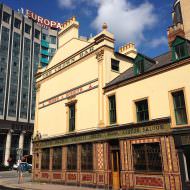