A five-storey office building built 1957-58 for the Inland Revenue. The building was designed by Morris de Metz and was officially opened by Terence O’Neil, then Minister of Finance, on 15 May 1958 (a plaque at the building entrance marks this occasion). The building was named ‘Olive Tree House’ since its opening in 1958 until 2014 when Concentrix opened offices in the building and changed the name to ‘Concentrix House’.

The building was placed on the market in November 2014 by Frazer Kidd, on behalf of Alterity Investments, inviting offers over £1.75m. It was reported in May 2015 that the building was sold for £1.95m.

Planning History
Deramore Property Group and Milligan Reside Larkin have submitted a number of planning applications for this site between 2006 and 2013. The applications are listed below:

Reference: Z/2011/1411/F
Submitted: December 2011
Decision: Approved (June 2012)
Proposal: Internal refurbishment of existing building with extension to retail and office use at ground and first floor and replacement of front facade.

Reference: Z/2008/2433/F
Submitted: December 2008
Decision: Approved (April 2009)
Proposal: Amendment to previous scheme (Z/2006/2044/F) to include demolition of existing building and erection of an 8 storey building with retail on ground and first floors and offices above. 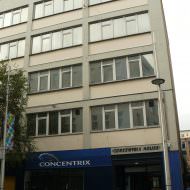 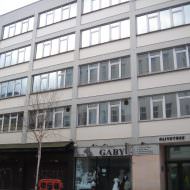