The Bullitt Hotel is a £4m hotel development comprising 43no. bedrooms, 3no. bars, restaurant, espresso bar, events space and courtyard garden. The hotel is accommodated within the structure of a 1960’s office building formerly known as Lagan House. Cathedral Leisure Ltd commissioned ADO Belfast and Strong Construction to convert and extend the former office building during 2016. The first phase opened on 15th October 2016. A second phase, comprising 30no. bedrooms and a rooftop bar is proposed during 2017.

The site was occupied during the early 20th century by the Minnesota Fats Snooker Hall; owned by City of Belfast Warehousing. These premises were demolished in the 1960s.

Mr N. O’Hanrahan and Coogan & Co Architects submitted a planning application (Z/2008/0115/F) with in January 2008 proposing to demolish the building and develop a nine-storey office building with ground floor retail unit. A second planning application (Z/2008/0352/F) was submitted in January 2008 proposing to demolish the existing building and develop a ten-storey residential building comprising 53 apartments and ground floor retail unit. Both applications were refused in June 2008 as it was deemed that the proposals would detrimentally affect the appearance of the Conservation Area. Both applications were then subject to planning appeals (2008/A0076 & 2008/A0074) and both were subsequently dismissed in February 2010.

Lagan House was acquired by Cathedral Leisure Ltd in June 2015. Cathedral Leisure and ADO Belfast submitted a planning application (LA04/2015/0675/F) in June 2015 to convert and extend the vacant office building for hotel use. Planning permission was granted in December 2015 and construction commenced during the same month. The first phase opened in October 2016.

Cathedral Leisure Ltd acquired the adjacent building (Annsgate House) in February 2016 for approximately £500,000. Annsgate House was built in 1993 and is located at the corner of Ann Street and Church Lane and comprises a ground floor bar / restaurant unit and office accommodation above. The building is proposed to accommodate phase two of the Bullitt Hotel. Cathedral Leisure and ADO Belfast submitted a planning application (LA04/2017/0497/F) in March 2017 proposing to convert Annsgate House to provide 30 bedroom guest accommodation and roof terrace. The application was approved in June 2017. 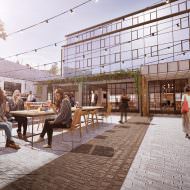 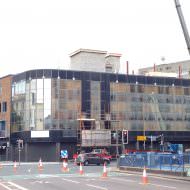 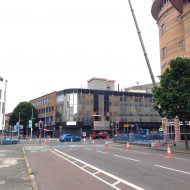