Belfast Central Railway Station was built 1973 – 1976. A contractor was appointed in October 1973 to build Central Station and Botanic Station and rebuild the trackbed and bridges. The station opened on 26th April 1976.

Following bomb damage in 1993 an area of the station’s entrance was refurbished.

NI Railways Co. Ltd submitted a planning application (Z/1999/3492/F) in November 1999 proposing internal refurbishment of the station and minor alterations and extensions. The application was approved in March 2000. The £6m refurbishment project (£2.9m from the European Regional Development Fund) was carried out by McCombe Bros. Contractors during 2002 and was officially opened in March 2003.

Translink submitted a planning application (LA04/2017/2134/F) in September 2017 proposing a replacement entrance foyer designed by Warwick Stewart Architects. The application was approved in December 2017. Cleary Contracting have been appointed to construct the new entrance, including upgraded ticketing area and retail/cafe area. Works are scheduled to be completed by September 2018 alongside the renaming the of the station to Lanyon Place. 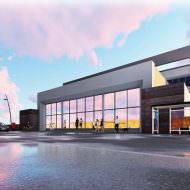 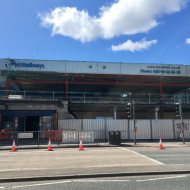