A four acre site bound by Ormeau Embankment, St Kilda Street and Ravenhill Reach. The site was previously occupied by Park Parade Secondary School, which later became part of the Belfast Institute of Further & Higher Education (now Belfast MET) campus. The former educational building was vacated in the late 1990’s and demolished in the early 2000’s.

Northwin Developments Ltd submitted a planning application (Z/2001/1130/F) in May 2001 proposing to demolish the existing education building and develop 56 apartments and 10 commercial units with carparking. The application was withdrawn in August 2002 due to COMAH restrictions (Control of Major Accident Hazards Regulations).

GGF Developments Ltd (Graham) submitted a planning application (Z/2004/0957/F) in April 2004 proposing 27 two storey business units designed by Coogan & Co Architects. The application was approved in December 2005 and in September 2006 the Department for Social Development announced that construction could commence on the £8m scheme in June 2007. The proposed scheme did not proceed.

In February 2008 the Department for Social Development announced that it had selected Graham Construction to develop 39 own door office units with associated car parking and landscaping on the site. A planning application (Z/2008/0477) for the proposed £18m scheme was submitted in the same month and approved in December 2008. It was anticipated that construction would commence in 2009 and complete in four phases over a period of 30 months. The proposed ‘Ravenhill Reach Business Park’ did not proceed and in November 2012 the Department for Social Development issued another Development Brief inviting redevelopment proposals for the 4 acre brownfield site. 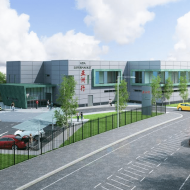