A four storey building designed by Young & Mackenzie for Arnott’s Department Store and built 1955 – 1958 in a neo-Georgian style with a rustic brick facade.

Previously on this site was a five storey building designed by Thomas Jackson for Arnott’s Department Store and built 1857 – 1858 by John Murphy. An extension designed by J.J. Philips was constructed by McLaughlin & Harvey in 1899 and a lift was added in the 1930s. The building was later destroyed by the 1941 Blitz air raids and the site remained vacant until the current building was built in the late 1950s.

Arnott’s Department Store reopened within the current building in November 1958 and continued to trade until closing in August 1974.

The Post Office relocated from Castle Place to the ground floor of Arnott House c2004.

Law firm Pinsent Masons occupied the building since at least 2001 until 2014 when the company relocated to the Soloist building at Lanyon Place.

Cauldhill Ltd acquired the building in November 2014 for £5.25m.

The building’s upper floors were refurbished during 2015 and a new facade lighting system was installed during autumn 2015. CBRE let 11,000ft2 across the first floor to technology company Rapid7. 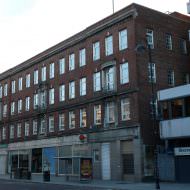