Previously on the site was a four-storey building known as Crown Chambers. The building was designed by William Eaton and built by Thomas Price between 1884 – 1885. On completion the building comprised three ground floor shop units and office accommodation above. The building was listed in 1989 (ref: HB26/50/181) although later demolished c1994 and replaced by the current building.

The current building was placed on the market in 2013 with offers invited in the region of £600,000. JD Wetherspoon purchased the building in 2014 for an undisclosed sum.

JD Wetherspoon submitted a planning application (Z/2015/0119/F) in February 2015 proposing to change the use of the building from retail to public house with external beer garden / smoking area and associated works including alteration to the shopfront. The application was approved in April 2016.

JD Wetherspoon applied for a licence to sell alcohol from the premises during 2017. It was reported in January 2018 that JD Wetherspoon’s application for a provisional grant of license was refused by the Belfast County Court. During the application process six city centre bars submitted an objection to the court.

Lambert Smith Hampton placed the building on the market in April 2022 with offers invited in excess of £850,000. 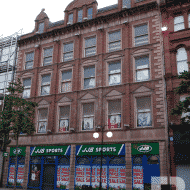 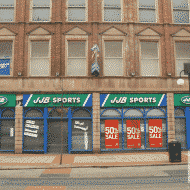